Manned by highly-trained and seasoned personnel stationed across the country.

Ready to deliver in the quickest time possible


Further to this news bulletin as of today, please be advised that heavy rainfall and flooding are expected and may render some roads impassable on affected areas. Hence, delays beyond our control may be experienced in the said areas.

Thank you and keep safe.

MANILA (UPDATED) - Severe tropical storm Ulysses gained more strength as it continued its approach towards the Philippines and is expected to develop into a typhoon in 12 to 24 hours, state weather bureau PAGASA said early Wednesday.

In its 5 a.m. bulletin, PAGASA said Ulysses was last spotted 180 km northeast of Virac, Catanduanes, packing maximum sustained winds of 100 kph near the center and 125 kph gusts while moving westward at 15 kph.

Ulysses, which is expected to become a typhoon, will reach peak intensity of 130-155 kph before landfall, the weather bureau said. It is likely to weaken when it crosses the Sierra Madre mountain range but it's expected to remain a typhoon while traversing the Luzon landmass, said PAGASA.

WS No. 2 was raised over the following areas, where 61-120 kph winds may cause damage to high risk structures, and down old wooden electric posts:

On Wednesday morning through late evening, heavy to intense with at times torrential rains will fall in Catanduanes, Camarines Norte, Camarines Sur, Albay, Quezon including including Polillo Islands, and Marinduque while moderate to heavy downpour will be experienced in the eastern portions of Cagayan and Isabela, Aurora, Nueva Ecija, Bulacan, Metro Manila, Northern Samar, and the rest of Calabarzon and Bicol Region.

Light to moderate with at times heavy rains will also prevail over the rest of Luzon and Visayas.

Flooding, rain-induced landslides, and sediment-laden streamflow, like lahar from nearby volcanoes, may occur during heavy or prolonged rainfall in affected areas.

Dear Valued Clients, Further to this news bulletin as of today, please be advised that heavy rai...

Dear Valued Clients, Further to this news bulletin as of today, please be advised that heavy rainfa...

Dear Valued Clients, This coming Monday, 02 November has been declared as a special non-working hol...

Dear Valued Clients, Further to this news bulletin as of night of October 29, please be advised th...

Dear Valued Clients, Good morning. Further to this news bulletin below by PAGASA on the typh...

We want to make your life as easy as possible and so we have designed a simple to use tracking system.

CELEBRATING A QUARTER OF A CENTURY DEDICATION TO EXCELLENCE 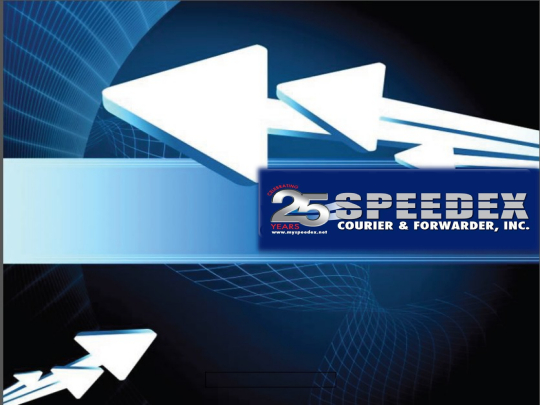 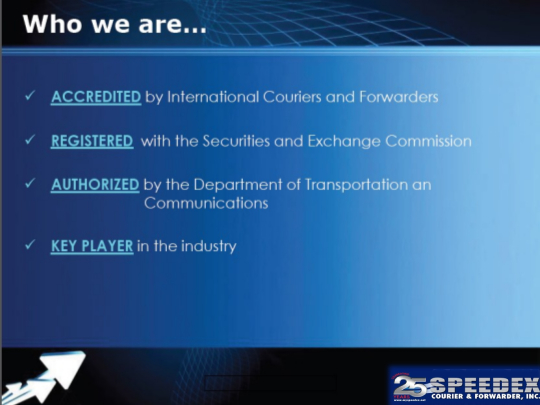 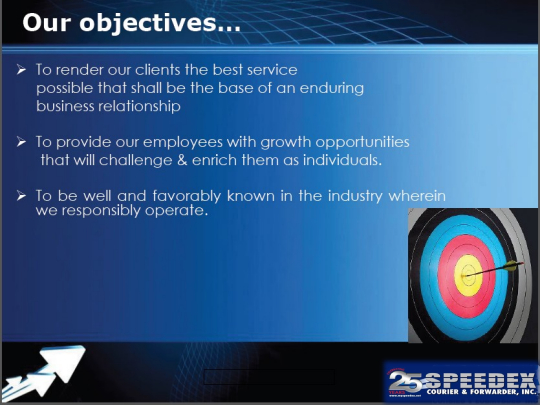 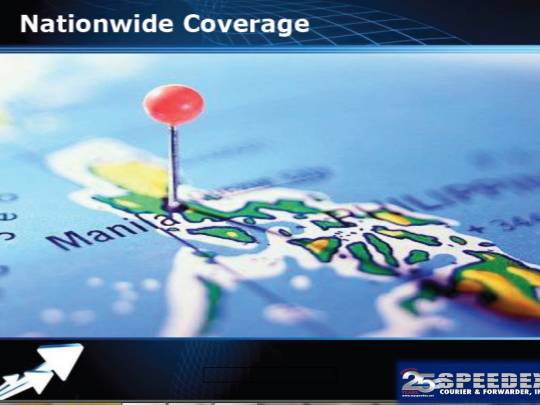 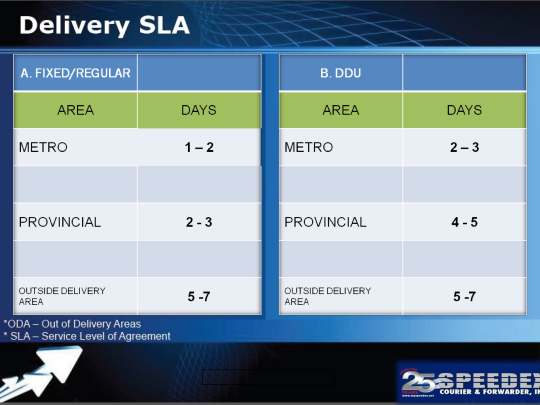 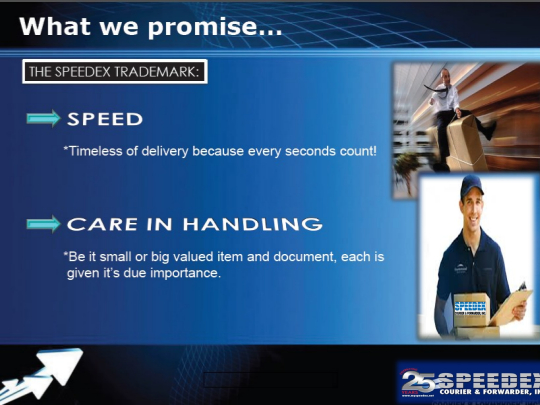 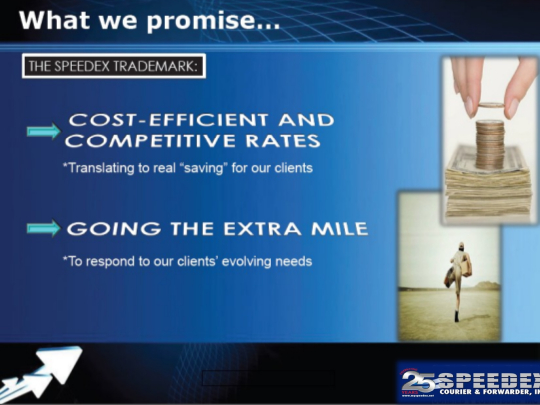 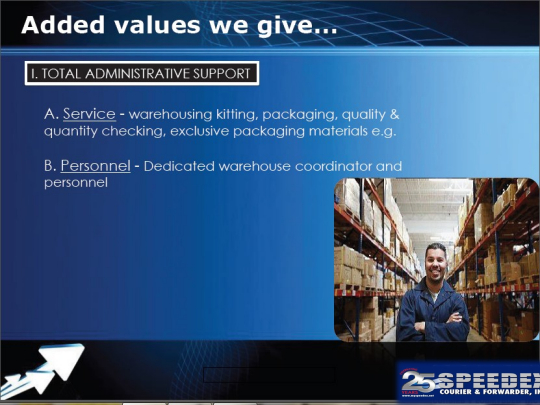 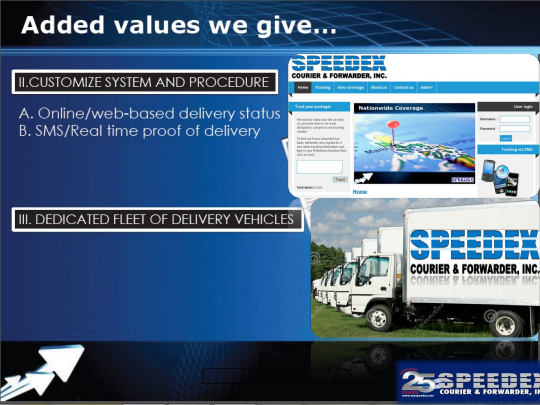 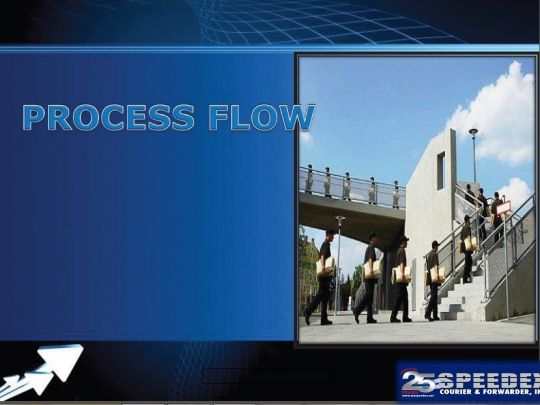 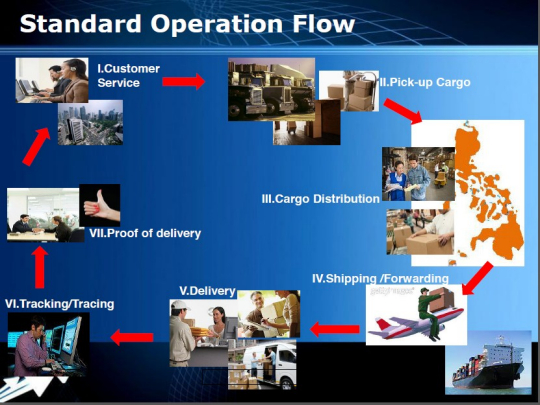 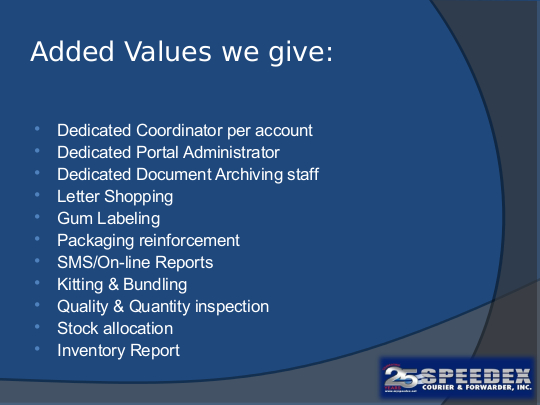 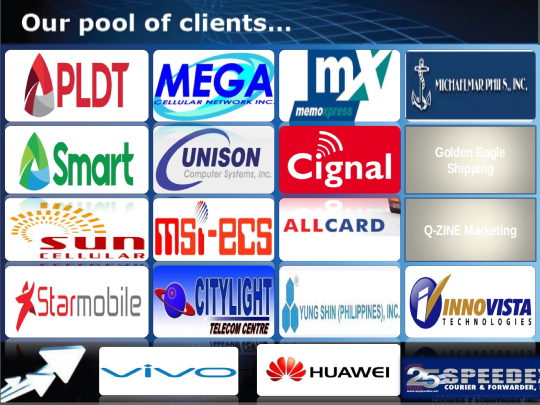 For 25 years now, one value remains constant with us at Speedex and that is "excellence". We take extreme pride in the services we provide and want every customer to feel confident every step of the way. From assessing our customer's needs to formulating appropriate logistics solutions, from hiring to training our workforce to meet all service requirements and from receiving your goods to delivering them efficiently, excellence propels us.

Gearing up for the opportunities of the coming years, we invite you to partner with us. Experience the utmost in quality service, efficiency and reliability, while getting the most value for your money.   Our name Speedex is synonymous to service competence and excellence. We are accredited by the leading names in international couriers and forwarders, registered with the Philippine Securities and Exchange Commission and authorized by the Information and Communications Technology Office (ICTO) under the Department of Transportation and Communications (DOTC).

Trustworthiness and integrity is our guarantee. At Speedex, every freight, parcel and mail is delivered with our established trademark of speed and safety. Every delivery is backed with care, confidentiality and a hassle and stress-free transaction experience for our customers.   Speedex, through the years, lives up to its name, reputation and promise. Our service accomplishments and milestones lend credence to it.

Your message has been sent. Thank you!